Congratulations to DJ Steel for his #1 Int’l Bestseller, Destiny’s Dream! 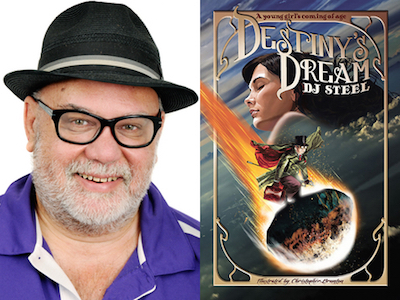 DJ Steel has been inducted into the Bestselling Authors International Organization
for his #1 International Bestseller, Destiny’s Dream ~ A young girl’s coming of age.

DJ attended James Cook University in Townsville, where he studied journalism and French. It was there he developed his interest in the Aboriginal tradition of storytelling and as a part Aboriginal, immersed himself in the culture of his extended tribe and the ancestry of his family.

Following his studies, DJ worked for the Murdoch Press daily newspaper in Townsville, The Bulletin. He worked in print media for fifteen years. During this time, his passion for storytelling grew, alongside his love of hiking.

During a stay with friends in the Southern Highlands of New South Wales, Australia, the spark of the story that was to become Destiny’s Dream germinated. In a village called Hill Top, the seed of his idea grew and the early drafts of Destiny’s’ Dream were written. On his return to Townsville, DJ worked and nurtured his idea and completed his first children’s novel with magnificent illustrations by Christopher Brunton.

We have taken over 1,000 Authors to Bestseller! Will you be next?
www.bestsellerlaunchpad.com

Posted by Expert Insights on January 27, 2017 in Uncategorized